How to Have Fun While Traveling for Business in Seoul, South Korea

In this post : hide
First, don’t rush out of the airport. Have a look around
Meeting colleagues for dinner? You can’t go wrong at Han Chu
Unwind with a walk through Namdaemun Market
Take in some local history at Sungnyemun Gate
Sungnyemun Gate
Get the group together at The Parkview
Honorable mention: Tuppel Deungshim
Leaving Seoul

I travel for business. A LOT.

But of the many destinations I’ve flown into over the years, few have offered the experience, cuisine or fun of downtown Seoul.

While brief, my trip to “The Land of the Morning Calm”  offered some amazing opportunities to absorb the sights and sounds of this bustling cultural metropolis, as well as to make some lifelong friendships along the way.

So, if you ever have business in Seoul and have some free time tucked away between meetings, here are a few ideas for making your trip a little more fun.

First, don’t rush out of the airport. Have a look around

Incheon International Airport is, well, an airport. But after deboarding our long overseas flight, I was nearly overwhelmed by the countless exhibits, artwork and goings-on throughout the terminal, a fun and quite extensive introduction to Korean culture even before I grabbed my luggage!

Making my way out of the gate and with a few minutes to spare, I stumbled into one of the terminal’s Korea Traditional Culture Experience Centers, where I was treated to a beautiful live performance of traditional Korean music (also known as Gugak). 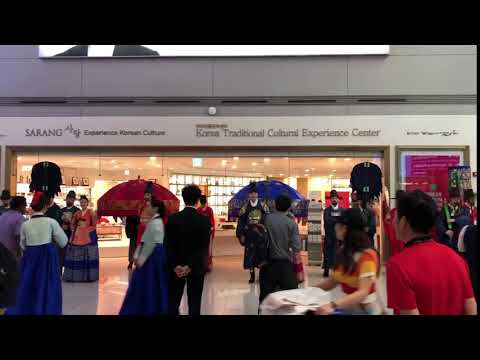 I then followed my instincts (and a few signs) to Incheon’s 4th floor, where I enjoyed a brief stroll through Korean Cultural Street and my very first look at the tiled-roof design (giwajip) of traditional Korean housing.

An elevator ride to the first floor and a brief detour through the Duty-free area later (including a wonderfully-simulated representation of the royal Gyeongbokgung Palace),  I was lucky enough to catch the end of a mini classical concert, enjoying a violin concerto before locating my bags and catching the Express to downtown Seoul.

Take it from me: No matter why you’re visiting Seoul, a short journey through the state-of-the-art Incheon Airport can be a great way to start your trip off right.

The train ride to Seoul took just under an hour. Luckily, the final stop was just a 5 minute walk from the hotel, leaving plenty of time to check-in, have a look around and meet colleagues for dinner at the iconic Han Chu in the Gangnam-gu District.

Just south of the Hangang River by way of the Hannam Bridge, Han Chu is famous across the city for its relaxed atmosphere and some of the area’s best chimaek, a delicious combination of Korean fried chicken and beer providing a comforting post-flight meal for myself and travel-weary compatriots.

Two hours of friendly chit-chat over amazingly crispy fried chicken and ice-cold beer not only put the perfect cap on a long day of overseas travel; it also provided an incredible first impression of authentic Korean fare – an experience I don’t think I’ll ever forget.

Following a short but smooth trip back aboard the Metro (Seoul gets public transit right), it was time to settle in and get ready for the busy week ahead.

Hang out at Han Chu: generous portions and a low-key atmosphere have made Han Chu a sought-after destination for celebrities throughout Korea.

Unwind with a walk through Namdaemun Market

After a full day of seminars and one-on-one training sessions, I was getting a little stir crazy. So, to stretch my legs a bit and take in some local culture, I headed down to the Namdaemun Market, the largest outdoor marketplace in Seoul (and the country).

In the heart of Seoul’s Jung-gu region, Namdaemun Market is an unparalleled hub of activity, featuring a seemingly an endless variety of vendors, goods, buyers and amateur bargainers from across the country.

Meandering through narrow walkways and hundreds of captivated tourists, I worked my way passed stall after stall filled with local wares, vendors selling anything from souvenir trinkets and electronics to shoes, spices, foods and all sorts of curious bric-a-brac from every corner of Korea.

Try as I might, I was unable to avoid the tantalizing aroma of freshly made dumplings and fried fish cakes emanating from a friendly Namdaemun vendor.

It wasn’t long before I found my hands full of food and toy souvenirs (for the kids, of course), forcing me to find a bench and enjoy my meal before moving on to the next section.

Day person, or night owl? Portions of Namdaemun Market are open around the clock, providing shoppers and hungry patrons and a great selection of eats and wares no matter when they’re ready to roll.

Take in some local history at Sungnyemun Gate

As I finished my tour of Namdaemun Market, I caught a glimpse of a remarkable, temple-like structure across the street. But it wasn’t until the next day (after an early morning meeting) that I came face-to-face with what is Seoul’s most cherished landmark:

A pagoda-style monument and glorious reminder of the city’s storied past, Sungnyemun certainly stands out amid the skyscrapers and traffic-filled city streets of downtown Seoul.

While the walk around and through the Gate didn’t take long, seeing the temple up close was both inspiring and humbling, providing a brief but powerful experience that continues to shape my perspective of Seoul and Korea as a whole.

For those new to the city and who enjoy a bit of history, stopping by Sungnyemun Gate is a must.

What to know: Following a 2008 fire, Sungnyemun underwent a significant historical restoration. The Gate was officially reopened to the public in 2013.

Get the group together at The Parkview

A few smaller meetings and a team debriefing helped wrap up much of my last full day in Seoul, setting up a well-earned celebration at The Parkview.

Located on the 1st floor of Hotel Shilla, our private dining room at The Parkview provided the perfect environment to recap the week’s business, share a few drinks and enjoy what I believe may be the finest dinner buffet anywhere in the city.

To say The Parkview’s buffet selection was impressive is an understatement. From fresh sushi and sashimi dishes to an assortment of Italian, Korean and American items – as well as an extensive wine list – the buffet at The Parkview offered something for everyone in our crew, even the pickiest among us (looking at you, Kathy!).

With an attentive staff and Mt. Namsan as the backdrop, this intimate but popular hotspot should be on every business traveler’s to-do list.

I’d be remiss if I didn’t mention our second-night meal at Tuppul Deungshim, a cozy Korean barbeque joint near the Itaewon Station in Yongsan-gu. While it did take a while to get a seat, the quality of hanwoo (Korean beef) at Tuppul was next level, making the experience more than worth the wait.

The next morning, I hopped on the Express Train back to Incheon, feeling rewarded to have turned a once-straightforward business trip to Seoul into an exciting, once-in-a-lifetime travel adventure.

And to make things even more interesting, Typhoon Lingling began its approach toward the city at nearly the same time of our scheduled takeoff. If we had departed just an hour later, we may have been stuck in the city for good!

Author – I’m Josh Vignona and #bizleisure has become a lifestyle. Don’t have the foggiest idea what that is? All things considered, it’s a LIFEstyle that I decide to live by. Being a business explorer doesn’t need to mean letting your life pass you by out the window of a plane or at the lodging bar. For me, business travel life is tied in with living at the time and place you are in and getting a charge out of the entirety of the encounters that encompass my day. Follow my Blog and Social Media to learn everything about it!

Disclaimer: The information in this article is provided for general education and informational purposes only, without any express or implied warranty of any kind, including warranties of accuracy, completeness or fitness for any particular purpose. It is not intended to be and does not constitute financial, legal, tax or any other advice specific to you the user or anyone else. TurtleVerse does not guarantee the accuracy, completeness, or reliability of the information and shall not be held responsible for any action taken based on the published information.

Looking to Travel in Style? Here are 5 Ideas

Revealed: The Top European destinations on Americans’ Bucket list in 2023

10 Best places to visit in Scottsdale

6 Simple Tips to Fix Slow Printing Speed of a Printer

Journey from Labour to Robot

Why and How Online Learning Rises During the Pandemic

12 Importance Of Installing Indoor Blinds In Your Home

Top 11 Quick, Easy, and Beautiful Hairstyles for a Busy Morning